Wildlife of Osoyoos Lake and Area 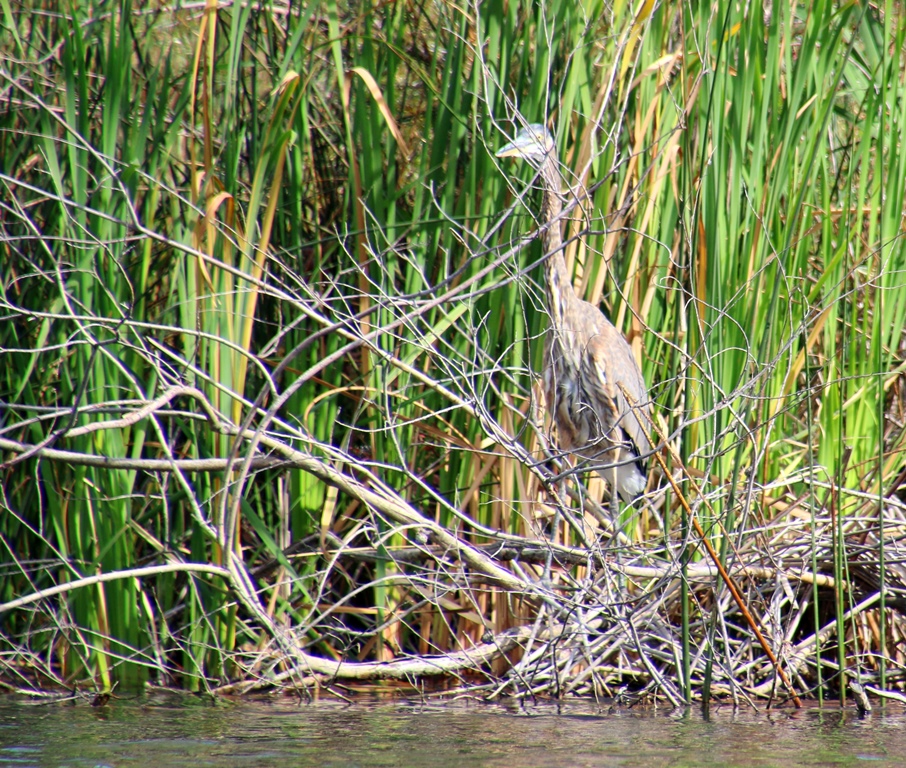 Can you spot the large bird disguised as shore brush in the oxbows at the north end of Osoyoos Lake? Photo Credit: Neil Bousquet

Osoyoos Lake is beautiful.  It teems with wildlife and many rare species that can only be found in its wetlands and oxbows.

Osoyoos and the southern part of the valley northward to Kaleden enjoys the arid desert habitat and climate shared by vast tracts of land to the south comprising the North American Desert. This is a conglomeration of hot deserts in Northern Mexico and California and the cooler, or cold, Great Basin Desert of Idaho, Utah and Nevada.

Our southern valley may be considered the final northern extremity of this system.  The level benches, or Kame terraces that rise from the lakes and river course of the Okanagan are sedimentary deposits formed at the end of the last great ice age, and support a rich and diverse community of plants and animals known as the antelope-brush ecosystem. This is the pocket desert, an endangered and important Canadian ecosystem that defines Osoyoos and its surrounding area.

The entire valley serves as a crucial ‘corridor’ for migrating birds, animals and insects travelling between northern Canada and southern and central USA. Even plant life has used this corridor over time to spread grasslands from the south to the central interior of BC. Some of the migrant species and many of the resident species are on the endangered species list.

All species in nature are part of a closely-linked chain, dependent on each other for food, shelter, and reproduction. This is particularly true in the Osoyoos area because there are several unique ecosystems that are linked to each other: the water courses and wetlands and the lush vegetation that surrounds them; the sagebrush, bunch grasses and antelope-brush habitat of the dry benchlands; the ponderosa pine/blue bunch wheat grass and rocky slope ecosystems; then at higher altitude, the Douglas fir and alpine meadows.

Osoyoos Lake and its adjacent riparian areas form an integral part of this chain: indeed, every lake, river and tributary of the Okanagan is of the utmost importance to the wildlife of this valley.

The area’s natural habitat is shrinking at an alarming rate due mostly to increased population and development. Other factors include agriculture and ranching, logging, golf course construction, and civil engineering and utility infrastructure.

The South Okanagan-Similkameen grasslands are among the top four most endangered ecosystems in Canada.

Wetlands in the Okanagan have been reduced to 5% compared to 100 years ago.

The Okanagan River was listed by Earthwild International in 2003 as the third most endangered river in Canada.

Osoyoos Lake and its surrounding area is home to one of the highest concentrations of endangered species in Canada.

The bridge at Road 18 is probably the best place to watch sockeye salmon returning upriver to spawn – peaks in late October.

Below are some of the more well known or endangered species to be seen in and around Osoyoos Lake. This list is not intended to be fully inclusive.

Remember that wildlife surrounding Osoyoos Lake often overlaps with the wildlife of the Osoyoos desert ecosystem. Please check out the Osoyoos Desert Centre website for more information on plants, mammals and birds of the south Okanagan.

Endangered species and ecosystems (BC Ministry of Environment)