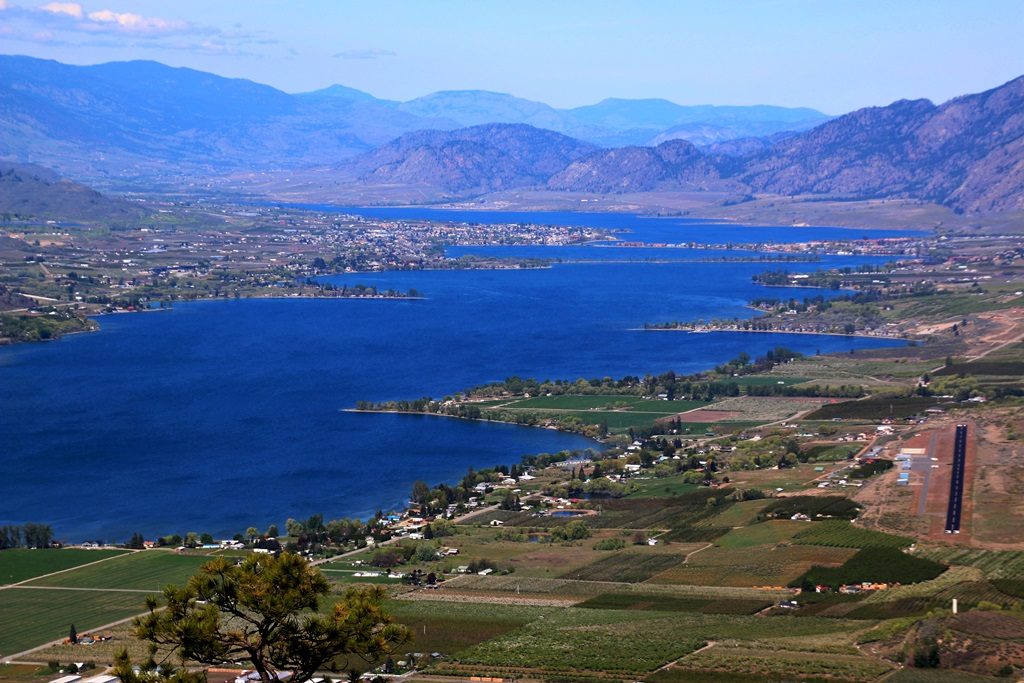 The name ‘Osoyoos’ comes from the First Nations (Syilx’tsn) word ‘suius (soo-yoos)’ meaning ‘place where two lakes meet’. The Okanagan Valley was formed by a huge glacier during the last Ice Age approximately 17,000 years ago. As the ice sheet retreated, the glacier meltwaters formed Osoyoos Lake and all the others in the valley.

The lake system begins Armstrong in the north Okanagan and is fed by the eastern mountain snow packs, down through a series of lakes connected by the Okanagan River: Kalamalka, Okanagan, Skaha and Vaseux Lake to Osoyoos Lake. Then it flows into the Okanogan River in Washington State and continues south via the Columbia River into the Pacific Ocean.

Osoyoos Lake has two unique sand and gravel spits running east-west right across the lake; the first being Haynes Point and the second being a little further north on which Highway 3 and Motel Row have been built.

It is an international waterway, straddling the 49th parallel and controlled in Canada by the Coast Guard and patrolled by the Royal Canadian Mounted Police. The water drains into the Okanogan River (yes, different US spelling of ‘Okanagan’) and then into the Columbia River system. The lake varies in depth from 46 feet (near White Sands) to 208 feet (opposite the Packing House). The average level is 911.5 feet above sea level.

Osoyoos Lake is divided into three basins, known as the North Basin, Central Basin, and South Basin. Its deepest part is in the North Basin at 208 feet. It is about 70 feet deep near the U.S. Border.

The lake is ‘stratified’, meaning it has different layers.  It has ‘epilimnion’ at the top (warm) and ‘hypolimnion’ at the bottom (cold).  Twice a year, when the upper and lower temperatures are the same (about 4C), the layers of the lake actually switch places or ‘turn over’; usually late April and late October.

The lake is also classed as “mesotrophic” meaning it is high in nutrients, such as phosphates and nitrates and high in plant and algae growth and low in clarity. Osoyoos Lake has more phytoplankton (microscopic plants which float free in lakes) than most of the other lakes. Consequently, its water clarity is reduced.

Lake levels are controlled by the Zosel Dam in Oroville, Washington State.

Because of the lake’s condition, it was designated as ‘fragile’ by the Provincial government in 1972.  In 1989, Washington State carried out tests and found DDT in the fish sampled.  Thirty years ago the lake system had a healthy Kokanee fish population, but by 1995 it had been reduced to six per cent of its former stock.  Today the Kokanee are beginning to return.

The phosphate levels, which were twice the level in Osoyoos Lake when the OLWQS was formed in 1990, have now been reduced to a more acceptable level. This is partly a result of sewer and treatment plant construction up the valley, and also to public education. Nitrate levels in the lake have also been reduced, though they are still a concern in the surrounding groundwater (aquifers).

In 1975 Eurasian milfoil was introduced to the lake (probably from household aquariums or inter-lake boats) and in spite of continuing efforts to reduce this problem, we are only able to control it to a point.

The natural shoreline  (‘riparian’ vegetation) is gradually being replaced with concrete walls and fences, grass lawns, docks, and other artifical man-made elements.

There is virtually no shade on either side of the lake, contributing to the high water temperatures, which also makes it difficult for fish to breed or feed in the shallows. The salmon must seek the depths to keep cool, where below 17 C is preferred by Salmon.

The reduction of the oxbows and the creation of the river channel at the north end of the lake took place in the early 1950s during channelisation.  Wetland areas are also disappearing. One of the remaining ones is located just south of Haynes Point and is now owned by BC Parks.