Dams and the Okanagan River 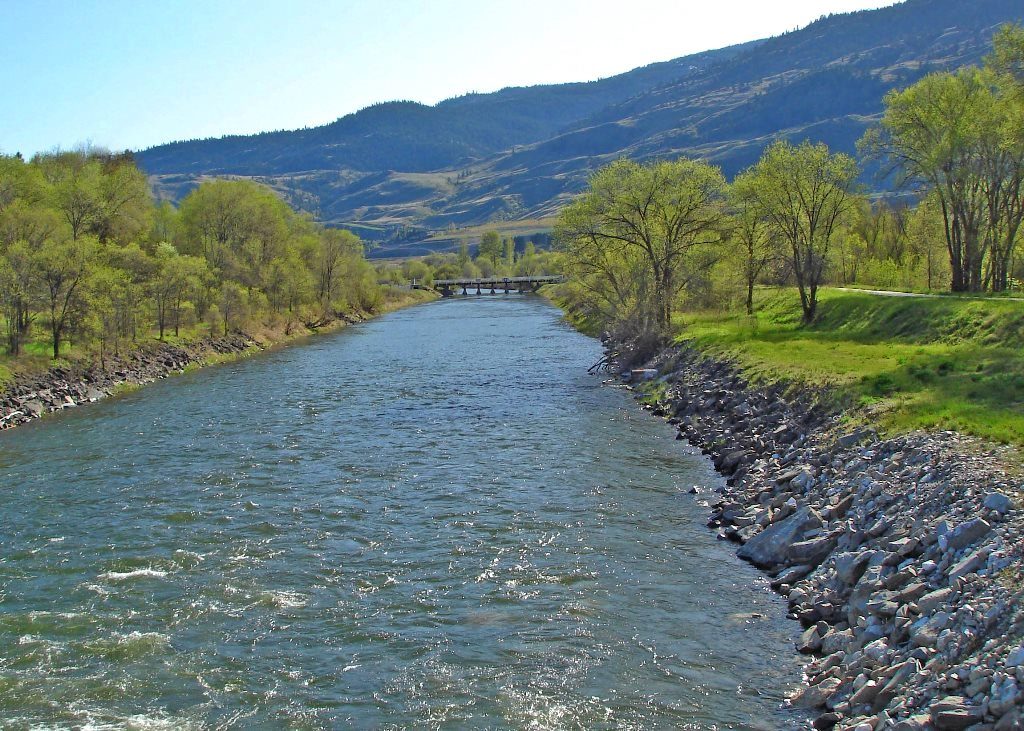 The Okanagan River begins south of Penticton and continues southwards through Okanagan Falls, Oliver, and Osoyoos where it exits Osoyoos Lake into Washington State, changing its name to Okanogon River as it crosses the border.

It joins the Columbia River system at Brewster, WA., eventually reaching the Pacific Ocean near Astoria, Oregon. The Columbia is the largest river in the Pacific Northwest, and with its numerous tributaries and wide-ranging geographical area, is one of the most important water systems in North America.

The Canadian portion of the Okanagan River is a 37 kilometre long waterway that has been significantly modified by irrigation and flood control dams, channelization, and river flow containment dykes. This straightening of the river has resulted in a loss of approximately 50% of its original length.

This was due to the stress put on it by channelisation, dams, and more recently to increased development and pollution, its depletion of migrating salmon, and demands on its water supply by agriculture and increased human population.

Dams have an impact on Osoyoos Lake in two ways:

1) They affect (directly or indirectly) the level of water in the lake.
2) They limit the numbers of migrating sockeye salmon in the lake.

Most of the dams listed below provide irrigation, flood control, and/or hydroelectric power to the surrounding area.

Located at the south end of Osoyoos Lake in Oroville, WA, the original structure was built in 1927 as a millpond to service logging companies, and has been enlarged and upgraded twice since then.

The dam can have a negative effect on water quality in Osoyoos Lake since it acts as a ‘plug’, arresting the natural flow of sediments, bacteria, chemicals etc. that would normally pass naturally through the lake’s outlet via the Okanogan River.

In February, 2006 a custom-made fish-passage chute, complete with a state-of-the-art, motion-detection and time-lapse video, was installed on both sides of the dam to capture fish passage events 24/7, 365 days a year.

Originally built in the early 1920s and located at the base of a tall cliff known as McIntyre Bluff just south of Vaseux Lake, the dam is currently used for irrigation of surrounding farmlands.

It was rebuilt in the 1960s to prevent exotic species such as pumpkinseed, perch, and bass from moving upriver. Unfortunately, this in turn prevented salmon stocks from migrating upstream (it has no fish ladder) and nutrients from migrating downstream.

Because of the high fisheries values associated with the river system, research is underway by the Okanagan Basin Technical Working Group to address these issues. This group includes members from the federal Department of Fisheries & Oceans, BC Ministry of Environment, and First Nations representatives.

Current projects include counting and studying fish as they arrive at the dam, and studies of water flow, temperature etc. Future ideas may include construction of riffles/pools, a spawning channel and re-vegetation of the streambanks, and a fish ladder.

South of McIntyre dam meanders a seven-kilometre stretch of water that is the only remaining part of the Okanagan River not yet channelised. Salmon are able to lay their eggs only in this brief section, where pools, gravel beds and sufficient cold water and nutrients exist for spawning.

Recent changes at the dam now enable fish to continue upstream past the dam.  For more information, please click the links below: Thousands of salmon leap changed McIntyre Dam (2010)

Skaha Lake Outlet Dam, OK Falls – There used to be a natural fall of water here before the present dam was built in the 1950’s for flood control purposes.

Kalamalka Lake Dam – Situated at the south end of the lake as it flows into Okanagan Lake via Vernon Creek.

Columbia River Dams – The Columbia River Basin is the most hydroelectrically developed river system in the world, with more than 400 dams and hundreds of major and minor structures along its tributaries.

Some of note include the Chief Joseph hydroelectric dam, the Grand Coulee, a hydroelectric/irrigation dam which claims to be the largest concrete structure in the US, and the Wells Dam, completed in 1967 and situated 180 km from the Okanagan River. 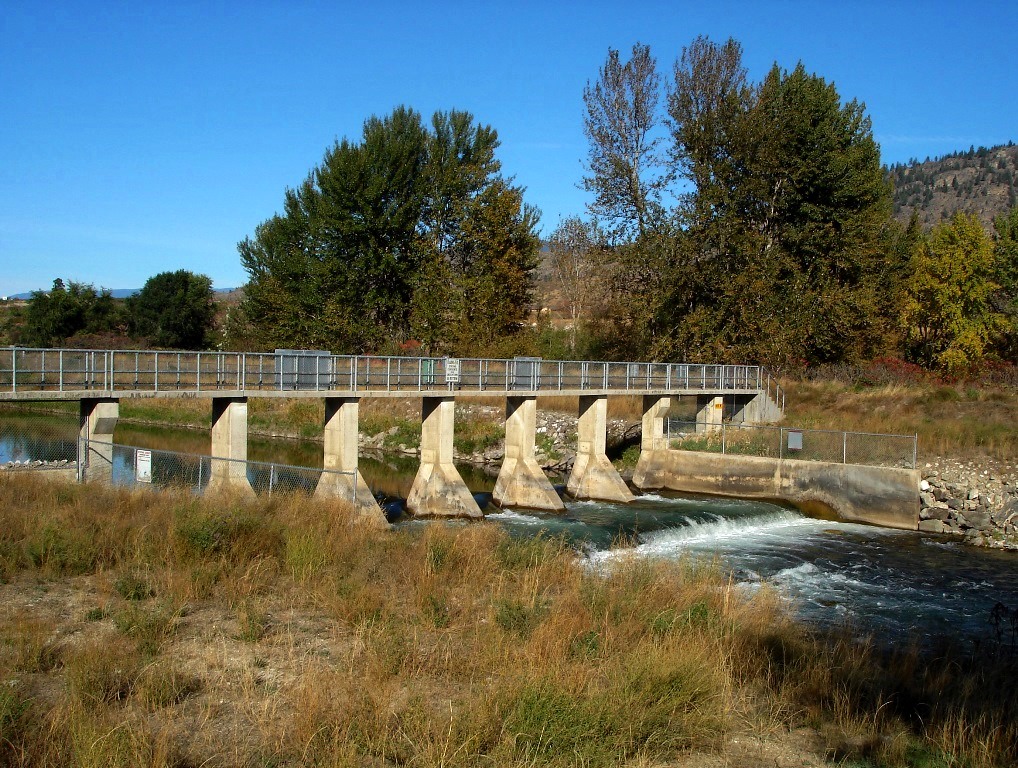 One of several vertical drop structures across the Okanagan River channel between Oliver and Osoyoos. Photo Credit: Alicia Osland

Designed to regulate the flow of water as it gradients downhill, these waterfalls had to be built when the river was channelized, preventing the water from flowing too quickly and posing a downstream threat to habitat erosion, fish migration and human safety.