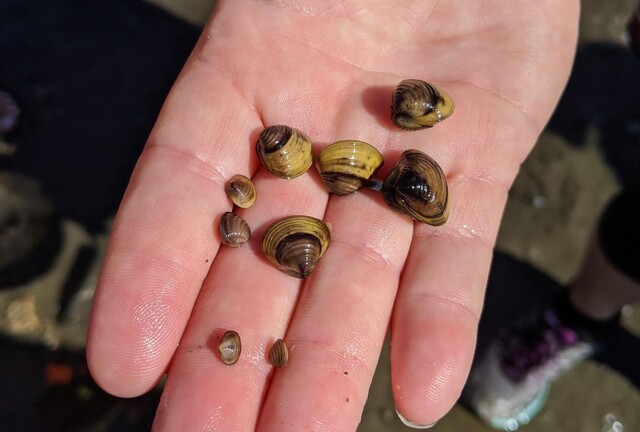 Invasive Asian clam populations have been found in two locations of Shuswap Lake.

A survey conducted by the Columbia Shuswap Invasive Species Society says Sunnybrae and Canoe Beach are the two of the impacted areas, although the survey is still ongoing. The survey was kickstarted last year when dead Asian clam shells were found on the beaches of Shuswap Lake last year.

“At Sunnybrae we were finding around 20 clams per square metre of lake bed”, says Sue Davies, aquatic coordinator for CSISS.

Asian clams are not to be confused with the invasive quagga and zebra mussels which are not known in BC at this time. Ongoing measures to prevent and monitor zebra and quagga mussels continue, along with watercraft inspection stations at the provincial border crossings.

“The larvae of this species are microscopic, they could hitchhike in the smallest amount of water in your watercraft and survive to populate another lake,” says Davies. “Please make doubly sure that you clean, drain, and dry all gear and watercraft every time you leave a lake or river – even if you’re going to re-launch somewhere else in Shuswap Lake.”

Asian clams have been kept as aquarium species while also being used as bait and consumed by humans. Any one of these factors could be the reason for the dead shells on the beach and the mussel colonies in the water. This is the first confirmed presence of live Asian clams in Shuswap Lake, although they have been found in the Fraser Valley and on Vancouver Island.

“An individual (clam) can produce up to 70,000 eggs per year under optimal conditions and they can reach densities of up to 10,000-20,000 individuals per square metre of lake bed,” adds Davies. “They are filter feeders that can reduce biodiversity and food available for fish, and dense populations may have the potential to clog filters on hydro systems and water pipes, imposing costly maintenance.”