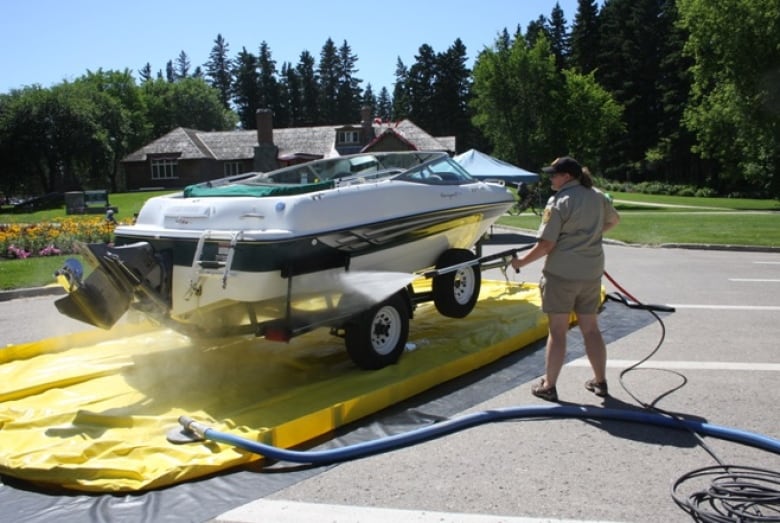 CBC News · Posted: May 18, 2019 6:00 AM CT | Last Updated: May 18
Staff at Riding Mountain National Park are trying something new in their fight to keep zebra mussels out of the park’s waters.

If boaters and paddlers want to use the lakes and get a seasonal permit, they have to get trained on how to keep zebra mussels from spreading — no training, no permit.

“Our motor-boaters and paddlers play a key role in keeping aquatic invasive species such as zebra mussels out of our water,” explained Richard Dupuis, manager of visitor experience at the park.

“They of course care about this place — they want to take part and have a way of engaging with us to protect the waters within Riding Mountain National Park.”

The roughly hour-and-a-half-long training sessions will teach boaters what to look out for with invasive species like zebra mussels and the hands-on skills needed to keep them off their watercraft and out of lakes.

Sessions are taking place at the park’s visitor centre in Wasagaming as well as in nearby communities including Dauphin, McCreary and Rossburn.

Once the training sessions are completed and mandatory inspections of watercraft have been made, visitors will be issued their seasonal passes and can enter park waters as often as they like, provided they don’t launch anywhere outside the park.

In that case they’ll need to be reinspected.

The invasive species are a concern because if they spread, zebra mussels will choke out everything else in a lake because they reproduce so quickly, with millions of mussels forming carpets on the bottoms of boats and along lake bottoms, biologists say.

Zebra mussels were first detected in Manitoba in Lake Winnipeg in 2013 and are now well-established in three Manitoba waterways. They were detected in the Red River and Cedar Lake in 2015, according to the Manitoba government.

Parks Canada was forced to close a lake and campground in the park to the public after DNA evidence of zebra mussels was found in water samples taken in the summer and fall of 2017.

Whirlpool Lake, on the eastern side of the southwestern Manitoba park, and its campground area were closed in December of that year because of the find.

Dupuis said the lake and campground have since reopened after testing found no further evidence of live zebra mussels in the 3,000-square-kilometre national park on Highway 10 north of Brandon, Man.

But they can’t be too careful, he said, adding inspection stations for watercraft including boats, kayaks, paddleboards, inflatables and canoes will be open daily at the park until September.

More information on the seasonal permit orientation sessions can be found on the park’s website. To sign up for a session call 204-848-7275.